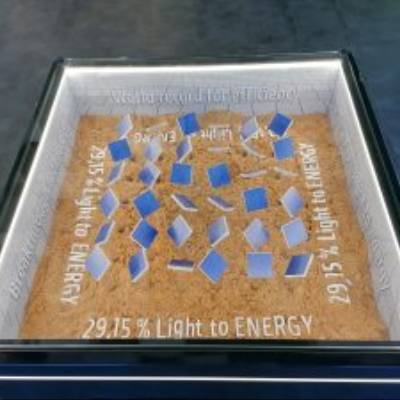 The six-month-long World Expo 2020 taking place a year later, began in October and has already attracted millions of visitors from all over the world. Among the almost 200 participating countries is Lithuania, which exhibition focuses on sustainability. In World Expo 2020, the Lithuanian Pavilion features the invention of researchers from the KTU Faculty Chemical Technology, which helped achieve a global record for the efficiency of tandem solar cells.


At the end of 2018, a group of chemists from Kaunas University of Technology (KTU) synthesised a material that self-assembles into a molecular-thick electrode layer, aka monolayer, on the surface, which is dipped into a solution. This material was used by the physicists at the Helmholtz-Zentrum Institute in Berlin to construct a solar cell that turns 29.15% of accidental light into energy. In 2020, this world record-breaking efficiency value was officially certified by the CalLab of the Fraunhofer Institute for Solar Energy Systems.

KTU invention at World Expo 2020
Professor Vytautas Getutis, KTU Faculty of Chemical Technology
“Although World Expo 2020 is more aimed at the general public, it is very likely that the participation in the exhibition will increase attention towards our research group, and at the same time – towards the university. The record performance of the tandem silicon-perovskite solar cell exhibited in the Lithuanian Pavilion, which used materials created by KTU, demonstrates that environmentally friendly technologies developed in our country are can change the world,” says KTU Professor Vytautas Getautis, the head of the research team behind the invention.

Tandem silicon-perovskite solar cells designed by German physicists – in which one of the layers is made of organic materials synthesized by KTU – use cheap and easily recyclable raw materials.

“For our research group, international recognition is very important, as it is for the university and Lithuania – we can feel the results of it. This year, after the publication on the invention was published in such renowned scientific journals as “Science” and “Energy & Environmental Science”, we received 6 proposals to participate in international consortia, preparing project applications for the European Horizon program. On regular basis, we receive 1-2 similar offers,” says Prof Getautis.

Materials synthesised by KTU chemists are now commercialised and freely available to research groups and companies around the world. Participation in World Expo 2020 will further increase the visibility of the invention.

The Lithuanian invention helps reduce the effects of climate change

Solar energy technologies are especially relevant in the Middle East, including the United Arab Emirates, where the exhibition is taking place, and where there are more sunny days compared to other regions. According to Mindaugas Bulota, the Head of KTU National Innovation and Entrepreneurship Centre (NIEC), solar technologies allow the production of electricity in the same place it is needed, which also contributes to the reduction of transportation costs.

KTU invention at World Expo 2020
Mindaugas Bulota, Head of National Innovation and Entrepreneurship Centre, KTU
“Electricity is used in almost every step of our life, therefore the invention of KTU chemists is universal, with the potential to have a global impact. Efficiency is crucial in the transition to climate change mitigation policies. This is exactly what has been achieved with this invention of Lithuanian and German scientists – compared to other technologies, fewer materials are needed to produce the same amount of electricity,” says Bulota.

The perovskite and silicon tandem solar cell on display at World Expo 2020 was produced in cooperation between Lithuanian and German scientists – the material, synthesised by KTU chemists, was used to build a functioning solar cell by the physicists of Helmholtz Zentrum Berlin (HZB).

KTU at World Expo 2020
KTU invention at Expo 2020
The record-breaking tandem solar cell, which converts 29.15% of incidental light to electricity, featured in Lithuanian Pavilion on the World Expo 2020 is an example of a scientific solution that reduces the cost of energy production. Using traditional technologies, from 1 gram of silicone only a couple of square centimetres of the solar element can be produced. However, 1 gram of the material synthesised at KTU is enough to cover up to 1,000 m2 of the surface. In addition, the self-assembling organic material is significantly cheaper than the alternatives currently used in the market of photovoltaic technologies.

The technology invented by Lithuanians allows covering even rough surfaces of solar cells, such as CIGS copper-indium-gallium selenide and is adaptable to other photovoltaic technologies, such as organic solar cell production. The researchers believe that the use of similar self-assembling monolayers could be potentially extended to other applications including light-emitting diodes, photodetectors or organic transistors.

The intellectual property of the invention is protected by international patents. The licences to produce the materials Me-4PACz (for tandems) and Br-2PACz (for organic elements) synthesised at KTU laboratories were purchased by several global companies.

Opportunity to get acquainted with Lithuanian technological achievements

The main theme of this year’s Expo 2020 is the collaboration of minds and building the future, which is reflected in the sub-themes of sustainability, mobility and opportunities. The Lithuanian Pavilion, called “Openarium”, emphasises the importance of sustainability – made of wood, the Pavilion is decorated with traditional ethnographic motifs. The main idea of the Lithuanian exhibition is to portray our country as growing, sustainable and contemporary.

The record performance of the tandem silicon-perovskite solar cell exhibited in the Lithuanian Pavilion, which used materials created by KTU, demonstrates that environmentally friendly technologies developed in our country are can change the world.

“Participating in the global exhibition, which introduces 192 countries and is expected to be frequented by 25 million visitors, is a very joyful and important event. In sports terms, this could be compared to playing in the Lithuanian national basketball team at the World Championship,” jokes KTU Professor Getautis.

“This exhibition is a great opportunity to present the technologies developed by the Lithuanian researchers to the public. As this year’s World Expo takes place in the United Arab Emirates, it is a great way to increase KTU and Lithuania’s visibility in the world, to introduce Lithuania as a high-tech country. At the same time, of course, we seek to establish contacts with international companies that would cooperate with the university in the future in the development of this and other technologies,” says Bulota, Head of KTU NIEC.