Kaunas in the eyes of KTU international students 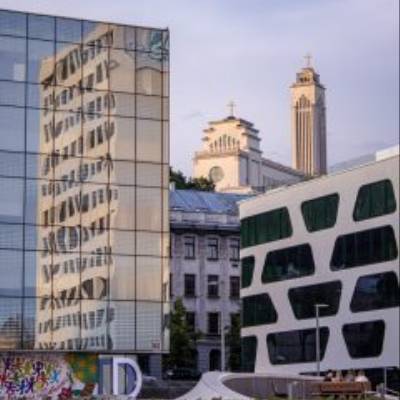 “As a very observant person who takes pride in paying attention to details, I couldn’t help but marvel at the number of traffic lights there are! What’s more surprising is that the drivers and citizens actually do respect the lights!” says Ifeoluwa Omolola Adesina, BSc New Media Language student from Nigeria.


To the international tourists coming to Kaunas, we proudly introduce our modernist architecture, feed them cepelinai and šaltibarščiai (aka “pink soup”), and take them to museums and on the roof of the Resurrection Church. This is Kaunas, we say, the city we hope they will admire.

What if we asked those, who have been here for a while, how this city looks to them? The impressions of Kaunas University of Technology international students coming from all around the world are varied as their backgrounds. Their insights into living in Kaunas might offer a new perspective for the locals, and some useful tips for the new international residents.

“My favourite location has to be the city centre, Laisvės Alėja. There’s so much to do and so many shops and restaurants to go there!” says Ifeoluwa.

Founded in 1843 and stretching for 1.6 kilometres (1 mi), Laisvės Alėja (aka Freedom Avenue) is the longest pedestrian street in Eastern Europe. The boulevard is separated into two walkways by a strip lined with linden trees – there are almost 600 of them along the street. In warm months, Laisvės Alėja is full of people enjoying their food al fresco, running their daily errands or simply enjoying life. The beginning of the street is marked by St Michael the Archangel Church and the end reaches the Old Town. Both musical and drama theatres are on this street, and here you can find one of the most impressive monuments of modernist architecture – Kaunas Central Post Office, which currently is turned into an exhibition space.

“In Kaunas, the synthesis of historically old and modern architecture is very attractive for me,” says Narmin Mammadova from Azerbaijan. Thus, a BSc Public Governance student summarises the feeling one gets while walking around Kaunas city centre.

“If you like nature, you will fall in love with Kaunas from the first second – grass and trees are growing everywhere,” says Mahammad Ismayilov from Azerbaijan, studying BSc Informatics. One of the things that surprised him most in Lithuania was how much people here love a healthy lifestyle and nature.

Even Ifeoluwa, who admits not being a great fan of walks, appreciates the number of nature sights and parks Kaunas has to offer.

“I really enjoy spending time in Draugystės Parkas. I’ve been there a lot of times to walk, meet up with friends and talk – even eat!” says a KTU student from Nigeria.

From Santaka Park to Pažaislis Monastery – Kaunas has a lot to offer to anyone who loves getting around on foot or by bike. The city takes pride in having the largest in Europe (almost 800 oaks) oak forest in an urban territory, which is located next to KTU Campus.

The possibility to walk freely and feel safe enjoying the greenery and sights of Kaunas is enjoyed by many.

“In my country, a woman cannot go out alone after five – it’s not safe. If you go out, it has to be with a group of other women or a male companion. In Kaunas, I love being not dependent on anybody, being free, feeling at peace – I can go out knowing that nothing will happen,” says Alejandra Gutierrez Luna from Nicaragua, a master’s student of architecture.

Aleksotas funicular, one of the two functioning in Kaunas, leads to a panoramic viewpoint over the Old Town
“Within a 10-minute walk, you can find yourself in a beautiful park. If you feel more adventurous, you can get on a bus and in 20 minutes you will be in nature. When you call your friends, you can say: let’s meet at X place in 30 minutes. Because it takes a maximum of 30 minutes to go anywhere in the city,” says informatics student Eylul Guleryuz from Turkey.

She loves that Kaunas is very compact, and if she misses active big-city life, she can easily travel to the capital, Vilnius. The trip only takes 1.5 hours by train.

After two years in Kaunas, Ifeoluwa is still impressed by the efficiency of the Kaunas transport system. From the very beginning, she noticed the abundance of traffic lights and how both pedestrians and drivers observe the traffic safety culture.

“Even after close to two years of living in Kaunas, I still marvel at the number of traffic lights buses have to stop at intervals. What’s more surprising is that the drivers and citizens actually do respect the lights! I can’t say it’s the same for us back home,” says a linguistics student from Nigeria.

Many busses and trolleybuses are going around Kaunas making all the areas of the city easily reachable. Paper tickets for the city’s buses and trolleybuses can be bought from the driver for €1 for one journey of any length and any one vehicle. However, it is cheaper and more convenient to purchase Kauno Kortelė, an electronic card available from kiosks around town, or to download a Žiogas app for your trips around the city. The Kaunas public transport routes and schedules can be found here.

2022 is the perfect time to visit Kaunas, as this year it is a European Capital of Culture.

“More than 40 festivals, 60 exhibitions, 250 performing arts events (more than 50 are premieres), and over 250 concerts are planned,” reminds Mahammad to those who heard about the ambitious programme of Kaunas European capital of culture for the first time.

If you arrive in autumn, try not to miss the retrospective exhibition by world-famous Fluxus artist Yoko Ono, go to see Kaunas Kantata in Žalgiris Arena and participate in the official closing ceremony of the European Capital of Culture. A must-see of the year full of culture is William Kentridge’s exhibition “That Which We Do Not Remember” at Čiurlionis museum in Kaunas city centre, which runs from January to the end of November 2022.

Ifeoluwa admits that she hasn’t had a chance to visit any of the exhibitions. However, she says that it’s hard to escape culture in the city – the concerts are usually held outdoors in the city centre or at Žalgiris Arena.

“Even one of my favourite artists, Khalid, was here for a concert recently!” says Ife.

Local food is probably different from what you’re used to

As the Lithuanian kitchen is roughly based on various combinations of meat and potatoes it can be rather challenging for those used to different foods.

“I wish I knew how difficult it would be to get the food I am used to. As an African, my diet is entirely different, and I am a lover of very spicy food. It’s challenging to adapt to eating food I’m not exactly used to,” says Ifeoluwa, a linguistics student from Nigeria.

As for the places to eat out, Ife recommends Grill London, Talutti, Amber Grill and Mangal. However, she confesses to being wary about trying Lithuanian traditional dishes: “I think it boils down to my unreasonable fear of trying new things. I would rather stick to what I know than try something new.”

Alejandra, who is originally from Nicaragua but has spent a substantial amount of her life in Zambia, agrees that food in Lithuania is very different from both of her homes.

“In Nicaragua, we have a lot of corn and fish, and we eat a lot of roots. Next to carrots and potatoes, we also eat cassavas – they take a lot of boiling to become soft and they are much more fibrous,” says Alejandra.

However, for Carlos Sosa Henríquez from Spain, studying MSc in Aeronautical Engineering, there are certain dishes in Lithuania’s traditional kitchen that he likes: “I am not a fan of cepelinai, but I like šaltibarščiai and potato pancakes. These two are my favourites.”

Enjoying food is one of the essential pleasures in life. Luckily Kaunas’ food scene is quite varied and growing. Today in Kaunas you can find different options for vegan, street, and world foods, and if you lack ingredients for your home cooking, you may visit a local Indian shop located in the historical Vilijampolė quarter, just after the yellow bridge in the Old Town.

Shopping centres can be visited for fun

Mega shopping centre housing the tallest aquarium in the Baltic States
When she is bored, Ife takes a walk to the “Flying Tiger” store in Laisvės Alėja as it has almost everything you might need, and for really cheap prices, too.

Also, she recommends taking a trip to the “Mega” shopping centre: “I have been to “Mega” just once, but it’s a place everyone has to visit. The mall is large, and if you like aquariums, you just might also see the biggest aquarium you’ll ever see in your life there.”

She is quite right – “Mega’s” aquarium is the largest and the tallest in the Baltic States. However, if you are also interested in local goods, you might wish to visit Kaunas outdoor markets – the farmers’ market on Saturdays next to Kauno pilis or the historical Žaliakalnis market. Depending on the season, there you will find all kinds of food, woollen socks, wooden spoons and tons of other things you never knew you needed.

Locals seem cool, and so is the weather

One thing that Ifeoluwa is unsure of, is if she will ever find local friends: “From what I have observed, it could be a little difficult to make friends with locals.”

At first, Mahammad from Azerbaijan also thought that Lithuanians were rather cool and distant – one of the obstacles, he thinks, might have been the language. However, now he has a lot of local friends.

“To be honest, except for religion, I don’t see a big difference between my culture and Lithuanian. As in my country, people here are pleasant, friendly, and talkative,” says a KTU informatics student.

“It takes time for the locals to open up and let you in. However, once they do – you’re family. It’s such a drastic change! I have a very good friend in my course – at the beginning, she barely spoke to me, and now she is hugging, chatting and bringing me to her home town to meet her parents,” says Alejandra from Nicaragua.

All the students agree that Lithuanians, albeit somewhat shy, are helpful and trustworthy. Upon her arrival to Kaunas, Ifeoluwa was impressed by how well everything is organised: “The orderliness and time consciousness of the people, businesses, and shops really shocked me. Everything is done in such an orderly manner.”

In addition to the coolness of the local people, weather can also present a shock, especially to those, who come from warmer climates. You need to learn to dress in more layers, advises Carlos from Spain – after all, Lithuania is in the north of Europe.