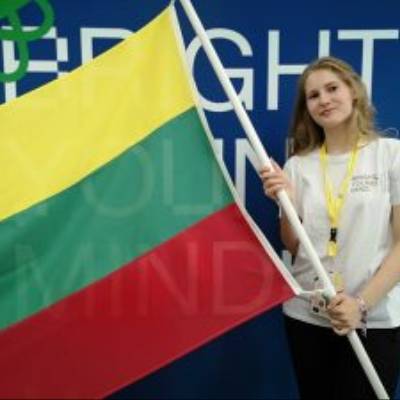 Kaunas University of Technology (KTU) applied chemistry student Meda Surdokaitė won the first prize at the European Union Young Scientists Competition in the Netherlands on Saturday. The news was released by the Ministry of Education, Science and Sport, and published by lrt.lt.


Surdokaitė was also awarded a special prize, an invitation to the Nobel Prize award ceremony in Stockholm, the Ministry of Education said in a statement.

According to the ministry, this is one of the best results in Lithuania’s history.

Surdokaitė, KTU
KTU applied chemistry student Meda Surdokaitė at the European Union Young Scientists Competition
Surdokaitė presented her chemistry research on optimising the synthesis of the fluorescent dye Nile Red. The aim of the project is to synthesise an organic dye for detecting microplastics and staining cells without the use of a toxic solvent.

The young scientist’s optimised production methods allow her to avoid the use of toxic substances, thus ensuring accessibility, adaptability and safer handling.

“Through organic chemistry, we can protect oceans from microplastics, treat serious diseases and create a greener daily life. Through my work, I have contributed to research on safety and sustainability, and learned about new methods”, Surdokaitė is quoted in the statement.

According to the young scientist, the optimised synthesis dye has already been successfully used in research.

“During the competition, I was informed that a biotechnology company had successfully used my optimised fusion product to stain myelin-forming brain cells. Myelin staining allows us to study processes involved in diseases such as sclerosis or schizophrenia”, she said.

The competition for young scientists aged 14 to 20 this year attracted participants from 33 countries in Europe, as well as the USA, Canada, and Israel. Nearly 90 research papers were presented in the fields of biology, chemistry, computer science, engineering, mathematics, medicine, physics, and social sciences.

Surdokaitė started her studies in applied chemistry at KTU this year.